On the trail of the last Knight – Londinium to Isca Augusta 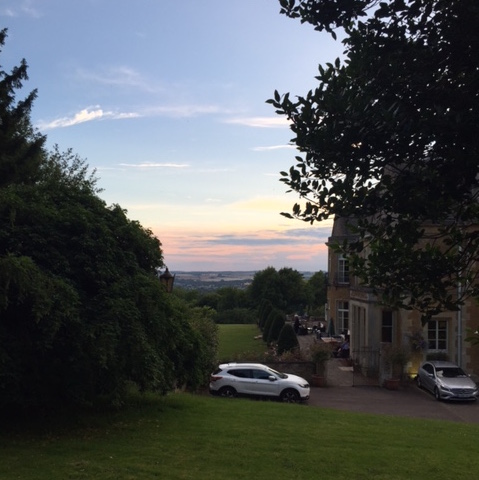 On the trail of the last Knight – Londinium to Isca Augusta

This post is part of a series. It chronicles my recent fourteen hundred mile journey through England, Wales and Scotland. During this trip, my daughter Morgan (a 21-year old Theatre student at Concordia University in Irvine) and I visited most of the key sites that appear in my latest novel, The Return of Sir Percival. To read from the beginning of the series you can start with the first post.

After landing at Heathrow, Morgan and I embarked on our epic (from our perspective) mission – retracing the path of the last Knight of the Round Table upon his return to a war-torn Albion, seven years after the death of Arthur Pendragon. In truth, our travel itinerary was the reverse of what occurs in the story, due to time constraints and other factors. If you look at the map that appears in the book, you can track our basic route (we also drove north and spent time in Edinburgh).

Our first destination was the Cotswolds, a rural area in south central England, renowned for its beautiful rolling hills, and quaint towns and villages. This location was geographically on the way to our first critical destination—Wales—and my brother Stephen and his family happened to staying there.

The first hour of driving, particularly in the Heathrow traffic, was difficult. The confluence of driving on the “wrong-side-of-the-road” (from an American perspective), the frequent roundabouts (I had a problem choosing the lane at the entry to each swirl that matched our designated exit out – presumably there was one) and the narrower roadways were difficult at first. However, I was able to “muddle through” without too many mishaps (e.g. periodically bumping the left curb with the left tire). 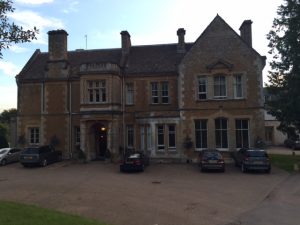 The Wyck House in the Cotswolds

We stayed at the Wyck House and Manor Hotel on the first night. It is located on a rise overlooking a magnificent expanse of land. In the above picture from the hotel grounds, you can almost see Sir Percival and his army marching southward, over the hills in the distance. On the next visit, I am going to stay awhile and spend more time hiking, and less time driving.

We stayed at the Three Ways Manor on the second night, which is located in a quaint town called Mickelton. Morgan and I had wonderful dinner there with my brother Steve, his wife Paula, and their son Thomas. Since we live on opposite coasts in the U.S., and only meet once a year generally, it was great to be able to get together.

After touring Mickelton in the morning, we drove south down the A429 to Circencester. Circencester appears on the map in the front of the book as Corinium, its Roman name. The A429 follows the track of a Roman road that appears in the book

Midway down the A429 we visited the ruins of a Roman Villa at Chedworth, which is located off the A429. It is quite a place, if you are an obsessive Roman history buff like me. The artwork on the walls and floors, and the luxurious bathing facilities (although much faded and still an archaeological work in progress) were amazing. At least some of the Roman/Briton elite lived like kings during the 300s.

After traveling through Cirencester, we drove northwest past the Roman settlement that appears as Isca on the map in the book (also known as Caerleon), on our way to the site of the ruins of the Abbey Cwm Hir. The next post in this series will cover my visit to the Abbey deep in Wales—Guinevere’s remote sanctuary in the novel.