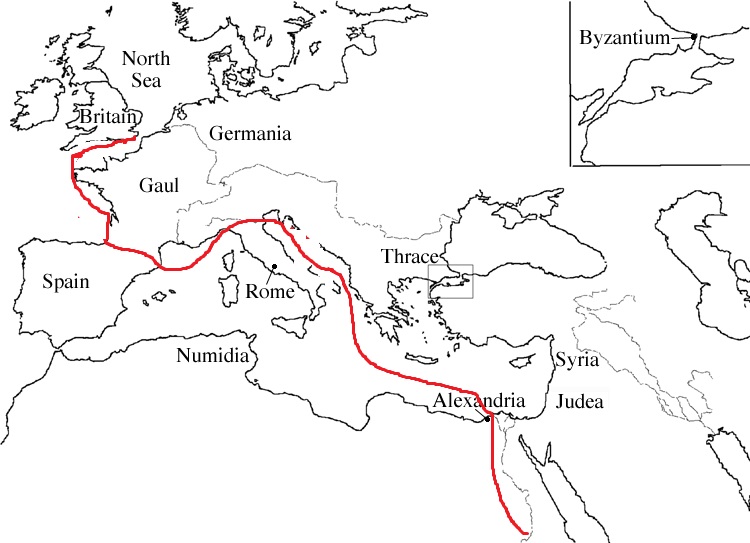 When a good friend of mine finished reading The Return of Sir Percival, he advised me that the map of Albion at the beginning of the book failed to encompass, and hence accord appropriate acclaim, to the knight’s entire journey home. He said “You need a map of the ancient world.” His point is well taken.

In the story, we learn that Sir Percival’s homeward journey begins with his release from a horrific prison in the ancient city of Syene, Egypt, and ends in the northern reaches of Albion. The trip from Syene, which is located on Egypt’s southern border, to Albion, or England, is approximately 3,700 miles.

Today, a diligent traveler could make the trip in about three days (assuming decent connecting flights), in relative comfort. In Sir Percival’s time, 600-650 A.D., it would have been a long, grueling and dangerous trip through deserts, over mountains, and across two formidable seas. Even Xenophon (and his ten thousand men) would have been impressed.

In accordance with the foregoing well-considered advice, I have laid out Sir Percival’s entire journey on a map of the western world. As the red line indicates, Percival and his Numidian companion, Capussa, traveled the length of Egypt, boarded a ship in Alexandria, and sailed to Aquileia at the top of the Adriatic. From there, they crossed the Italian peninsula, sailed to Francia, traveled overland to the former Roman port town of Lapurdum, and then boarded a galley bound for Albion. Chapter One opens as the galley rounds the northwestern coast of Francia and makes its run for Albion.

If there are any other details from the book that you would like me to expound upon in future blog posts please let me know in the comments.