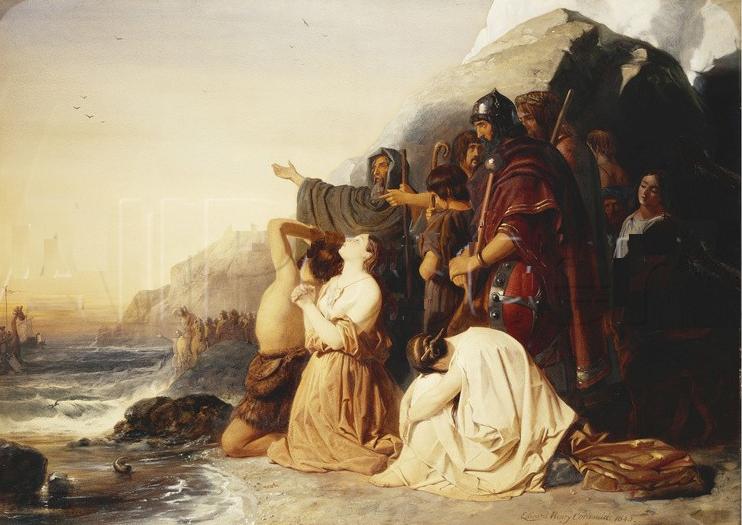 “You’re a man haunted by those two most terrible words: What if?” (Quote from the movie “The Time Machine”, 2002). I suspect every one ruminates over this inquiry at one time or another (generally after we have thoroughly and unnecessarily botched something up). When this inquiry is posed as to one or more historical events, or choices, the resulting questions that arise, along with the conflicting perspectives, are often fascinating.

If were a British historian, I would be inclined to pose the following “what if” inquiry: What if the Roman empire had not conquered Britain? More specifically, did this historical event accelerate or impair the civilizational progress of the people living there?

After reading Paul Johnson’s “History of the English People”, I had the distinct impression that this author firmly believed the “fall” of Rome relieved Albion’s indigenous people from the “dead hand” of an intellectually repressive and backward force. I am not sure the Romanized people who lived there in the late fifth century would have agreed (see attached painting), whilst they were being ravaged by Saxon, Jute and Angle invaders (I have read and very much enjoy this historian’s books). However, Mr. Johnson may be correct: By the fifth century, the empire was doing a lot of things wrong.

My bias in favor of the conclusion that the Roman invasion and occupation of Britain was a positive thing from a civilizational perspective is based upon the following admittedly simplistic observations. From the third through and fifth century, vast amounts of people were fighting for the right to live within the empire. If this existence were so terrible, presumably the opposite would have been true. Second (and this is an American bias) infrastructure is a central attribute of civilization. The Roman road system (with its mile markers and regular rest stops (mansio)), and the Roman sewer and water systems were astounding improvements over the status quo that existed when they arrived. Third, if your territory was within the empire, you had a measure of protection from barbarian invasions, and you had the opportunity to learn from and adopt the military methods of your conquerors (many of Rome’s generals in the last years of the empire were Goths). I suspect the “real” Arthur was in fact a Briton who did exactly this, and then used these skills to defeat the Saxons. Fourth, the Romans kept records, and understood the critical need for education (at least for some). This characteristic allowed many indigenous people who would otherwise have had no opportunity to acquire an education, to do so.

When I wrote “The Return of Sir Percival”, I made a point of investing Sir Percival with (among others) two critical attributes: He was well read, and his father and grandfather made sure that he was schooled in the Roman art of war. These skills play a critical role in the story and disclose my bias on the above “what if”. Yes, I think the Roman invasion of Britain was, in the “long run”, a good thing (my apologies to the Atrebates, Iceni, Brigantes etc.).