in Return of Sir Percival
16 Comments

“‘Well, now that you’ve decided to start a war, do you mind overly much if I propose a plan to win it?’”

The character Capussa, in The Return of Sir Percival, is a Numidian mercenary who endures a series life-and-death trials and hardships alongside Sir Percival, in a horrific prison. This shared pain and sacrifice forges a bond of friendship and respect between the two men that is a central part of the story.

Capussa brings to the story a Hobbesian view of the world that is tempered by his own innate goodness, wisdom, and sense of humor. As an author, I particularly enjoyed creating the back-and-forth between Percival and Capussa, at the end of each days’ ride, and exploiting Capussa’s story-telling talent as a means of accomplishing a number of subtle ends.

The positive reaction of readers and reviewers to Capussa’s character is both interesting and gratifying. To quote the review from Kirkus Reviews:

“Percival is appropriately noble and easy to root for against the utterly evil Morgana, but the real star here is the knight’s fiery friend, the warrior Capussa, whose sharp sense of humor should make him a favorite of readers.”

The exchange quoted above takes place in the novel on a hill overlooking what at one time was the Roman amphitheater in Londinium (London). Today, it lies beneath Guildhall, but its historical significance of the place has not been forgotten. 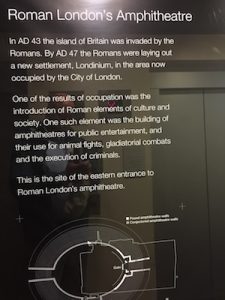